On 30 July 2019, the new West apron at Fiumicino airport (namely sector 900) has been opened to commercial traffic. The total area of the new apron amounts to about 120,000 square meters, where can stand No.6 aircraft of ICAO Code “Echo” (type Boeing B787-Airbus A330) and no.3 aircraft of Code “Charlie” (type Airbus 321 – Boeing 737). As per “Echo” Code stands, Fiumicino airport’s capacity has been increased by about 20%.

Spea Engineering developed the entire process of design and work supervision, including the Security Coordination during construction phase.

The new “remote” stands offer a full set of alongside services, such as refueling pit, 400Hz aircraft power supply with “Pop up” underground installation wells, pre-conditioned air supply for standing aircraft with “Hatch pit” wells. The new stands, in addition to being equipped with lighting system with Light Towers, can operate even in low visibility conditions. They are, in fact, equipped with both lead-in lights (which signal by underground recessed lights the path that each aircraft travels to enter its own stand), and the Visual Docking Guide System (VDGS). The latter system has been implemented to accommodate up to 161 different aircraft per model and set-up. In addition to the new apron, the works included a new Taxiway and about 10,000sqm in total used for ramp services.

Back to News Archive 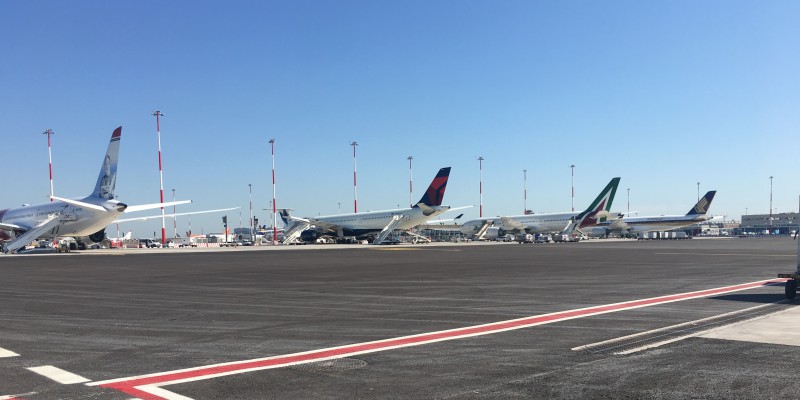